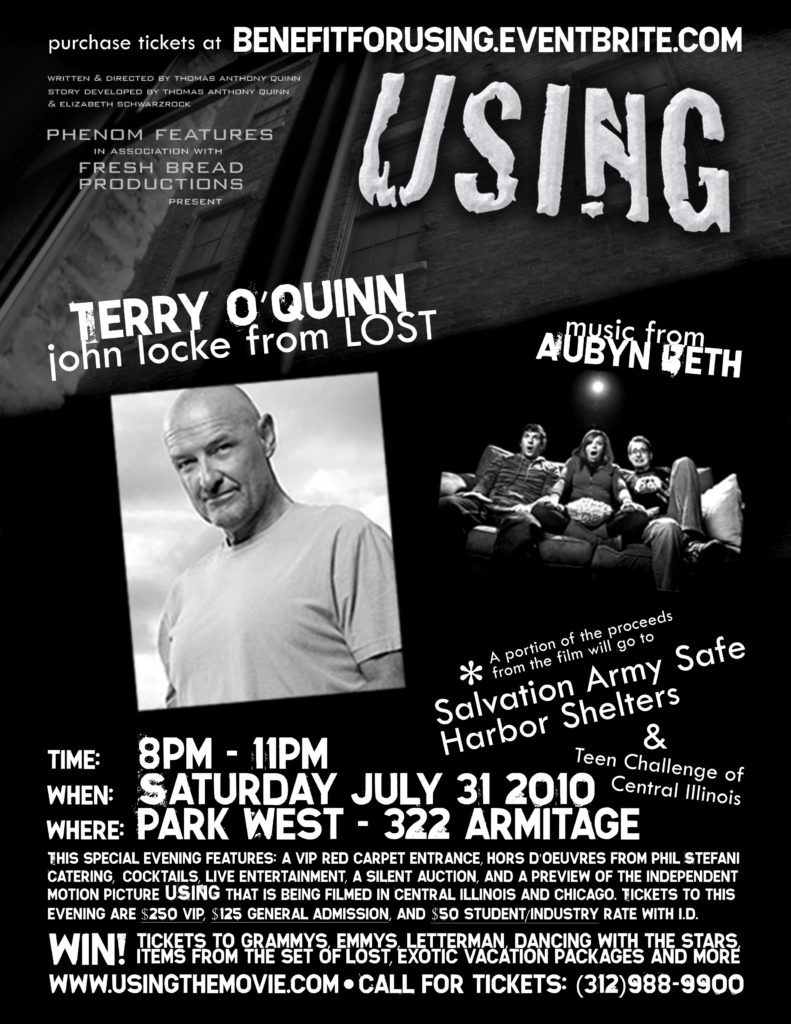 If you are a fan of ABC’s Lost, you won’t want to miss this event! Michelle Durpetti Events is so pleased to be producing the benefit for the upcoming independent motion picture, Using,  hosted by Phenom Features and Fresh Bread Productions! Emmy Award winning actor, Terry O’Quinn  (John Locke from LOST) will be making a special guest appearance!

This amazing event will be taking place at Park West on Saturday, July 31st, 2010 at 8pm. The funds raised from this evening will not only finance the movie, Using but will also benefit the Salvation Army Safe Harbor Shelters. The evening will feature cocktails, hors d’oeuvres from Phil Stefani Signature Events and live music from Aubyn Beth! The silent auction features amazing items including tickets to the Emmy awards and Grammy awards.

The film Using is a feature-length drama about loving deception and a father's desperate fight to save his only daughter from self-destruction.  It is a cautionary tale of addiction, betrayal and unlikely redemption, which asks the impossible question, "How far would you go to save a dying child?"

Illinois Wesleyan University professor Thomas Anthony Quinn of Phenom Features wrote the original screenplay. Kymberly Harris, award-winning Chicago actress and now Artistic Director of Fresh Bread Productions is not only producing the film but has also taken a role in Using.  Fresh Bread Productions is a 501(c)(3) non-profit company that has partnered with Phenom Features to produce this film.  Using production began on July 5th and will be filmed in Chicago, Bloomington and Lincoln, Illinois

According to Harris while being interviewed by Ruth Ratny of REEL Chicago, “It [The Benefit for Using] shouldn’t

appeal solely to LOST fans, but to film and music buffs, philanthropists -- anyone who enjoys a special night out in Chicago”

Whether you’re a LOST fan, a movie buff or really just like to have a good time for a great cause- you won’t want to miss this!!

← An Evening in Eden- A Great Success!
A 10th Birthday to Remember! →