Just an hour north of downtown Chicago in Antioch, Illinois, are the open fields and rolling meadows of Annali Farm. Owned and operated by Rush and Caroline Weeden, this picturesque destination was the setting of the 2013 Chicago Hunter Derby presented by Chicago Equestrians for a Cause on September 7 and 8.

On Sunday, festivities began with the ceremonious ringing of the bell by Chicago Equestrians for a Cause co-founder Rush Weeden, who was joined by Lynn Jayne and Caroline Weeden, also co-founders, Chicago Hunter Derby chairwoman Margaret Benjamin, and the event’s planners Michelle Durpetti and Sterling Berry. Rush Weeden, owner of Annali Farm, was awarded The Maybank’s Volunteer Perpetual Trophy for his outstanding and generous efforts towards making the 2013 Chicago Hunter Derby a success.

The Mill Creek Hunt Club and Foxhounds continued the opening ceremonies by sounding the horn on the field, a beautiful and meticulous course designed by Bobby Murphy and legendary equestrian and former United States Equestrian Team coach, George H. Morris. The course was reminiscent of fox hunting days with vintage jumps made of logs, rock walls and rustic coops and beautifully decorated by Rocco Fiore & Sons landscaping.  Luxury vehicles on display were courtesy of Knauz Land Rover.

The $50,000 International Hunter Derby took place over both days of the event.  Kelley Farmer flawlessly rode Mythical, owned by Kenneth Garber, placing first place in both the classic and handy round with a combined total of 398 points. The 2012 International Hunter Derby winner, Jennifer Alfano and horse Jersey Boy were this year’s third place finisher with a total of 381 points.

Guests won prizes such as a $1,000 certificate towards a McGuinn Tack Trunk, Clara Williams earrings, a Barbour Messenger Bag from Ann Hubbards Tack Shop and a jewelry and purse package courtesy of Barrington Saddlery in a raffle.  They played their hand at the Calcutta by guessing the winner from a pooled team of riders and horses. The Calcutta raised $21,000, and Tony and Marion Durpetti chose the winning team of riders, winning $7,000, which they donated back to the charities.  Arianna Vastino, owner and founder of Le Fash, donated $500 to the benefitting charities for the “Wear it and Win it Challenge”, as Alliy Moyer was donning her Le Fash shirt when she rode into victory in the National Hunter Derby. 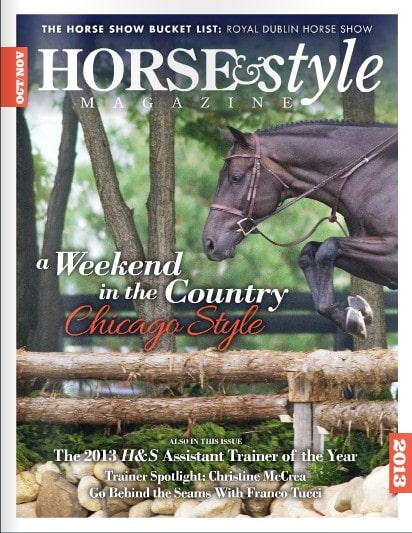 The Derby has gotten a lot of post-event press, including being the cover of Horse & Style Magazine! Check it out here!

About Chicago Equestrians for a Cause

Started by a small group of Chicagoland equestrian philanthropists, Chicago Equestrians for a Cause has grown the Chicago Hunter Derby into the premiere stand alone USHJA Derby event in the country. The Mission of Chicago Equestrians for a Cause is to showcase high-level equestrian events with the express purpose of raising funds for selected charitable institutions in the Chicago area. This year’s selected beneficiaries include Ann & Robert H. Lurie Children’s Hospital of Chicago, the University of Chicago Cancer Research Foundation and the United States Hunter Jumper Association.

For more information on Chicago Equestrians for a Cause visit www.chicagounterderby.com