On a Friday last September, Lisa was on her way home from work when Will sent her a text saying he was able to leave work early! This was very rare!  Lisa had dinner plans with her friends, so she was excited to be able to hangout with Will for a bit before going to dinner.  As soon as she opened their condo door, Lisa was shocked to see rose petals, champagne, and a note asking her to follow the rose petals up to the rooftop deck with the champagne.  When Lisa walked up to the rooftop, Will was dressed up and had a huge smile on his face.  After some of the sweetest words ever said to her, Will knelt down on one knee and asked if Lisa would marry him! Of course, she said yes!  After calling their families, and sending messages to friends, Will told her he had the rest of the night planned, all Lisa needed to do was dress up.  Later that evening, the newly engaged couple walked into a private party room with all of their family and friends for a surprise engagement party! It was the perfect way to celebrate the beginning of the rest of their lives together! 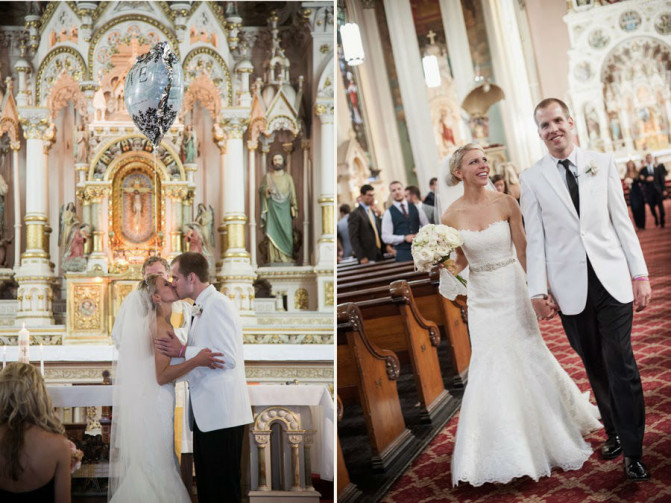 The gorgeous wedding day started at The Drake with the girls getting ready. The ceremony took place at the beautiful St. Michael's in Old Town. After the ceremony we took photos around the city then returned to The Drake Hotel for the reception. The musical entertainment was by The Dan Hayes Orchestra, wedding cake by Amy Beck Cakes, and sweets table by Sugar Chic Designs. The day was planned by Michelle Durpetti Events, cinematic elements captured by our friends over at Leap Weddings, amazing florals by Platinum Events, Diane Ayala was the makeup artist, Updo by Darren Anderson, Lisa's wedding gown was Pronovias, and her heels were by Angela Nuran. Accessories were from The Left Bank, Bridesmaids dresses were Amsale from Bella Bridesmaid. The Groom and Groomsmen looked sharp in Jos.A Bank.

Congrats Lisa+Will! to see the feature in its entirety, click here!